Cities play an important role in connecting people by proximity while offering several benefits to its inhabitants. However, city living is accompanied by potential health risks and challenges unique to modern cities. City living, in close proximity, brings together businesses and individuals that drive innovation, productivity, and socioeconomic growth in cities. However, under some conditions, city living is also accompanied by increased crowding. Overcrowded conditions are associated with decreased quality of life, unsafe living conditions, substandard housing, and poor sanitation; all of which can potentially exacerbate the transmission of infectious diseases in vulnerable populations.

The idea that city size is a driver of increased COVID-19 incidence is a common topic of discussion and debate. Initially, the narrative of big cities being the hotspot of COVID-19 cases was driven by the idea that density increased the likelihood of transmission. However, while the assumption of higher density of social contacts leading to higher rates of infection may be correct, this ignores the settings in which transmission occurs. Specifically, enclosed and poorly ventilated crowded spaces seem to be the key drivers of COVID-19 transmission.

In our COVID-19 Inequities in BCHC Cities dashboard, we include a section where the user can explore rates of COVID-19 by city-level features, including their size, density, and levels of overcrowding. In this blog post, we present two types of visualization that explore how rates of COVID-19 incidence have varied by city size on one side, and density and crowding on the other. 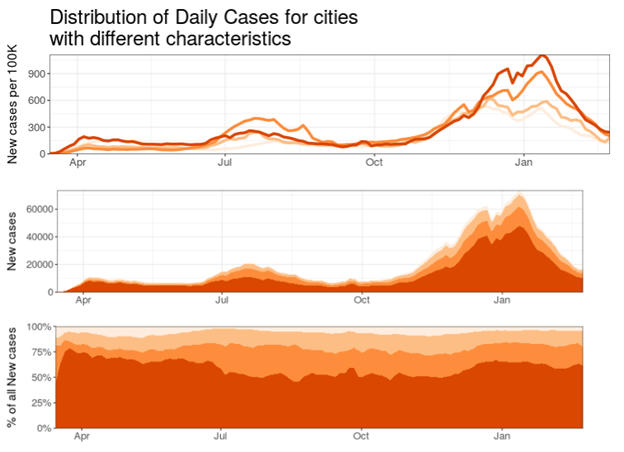 There are positive and negative health aspects of city living. In terms of city size, the relationship between city size and health appears to vary based on several other factors, such as geographic context, city definition, and specific health outcomes. Although there are several studies that examine the relationship between city size and communicable diseases, there are very few that focus on COVID-19 infection. Several communicable diseases such as chlamydia, gonorrhea, syphilis, and HIV are more common in large cities, and tend to increase with increasing city size (1). On the other hand, traffic fatalities tend to be relatively more common in smaller cities (2). City living offers many health benefits and is accompanied health risks; understanding the underlying factors that drive health in cities is critical to address the unique challenges presented to public health in cities and urban settlements around the globe.